Is Rachel Maddow gunning for Scott Brown’s Senate seat? The Massachusetts Republican thinks she is. In a fundraising e-mail sent out Tuesday afternoon, he says the state’s Democratic Party is trying to get the MSNBC host to challenge him for his newly acquired Senate seat.

“It’s only been a couple of months since I’ve been in office, and before I’ve even settled into my new job, the political machine in Massachusetts is looking for someone to run against me,” Brown writes. “And you’re not going to believe who they are supposedly trying to recruit—liberal MSNBC anchor Rachel Maddow.”

His evidence appears to rest on a message sent out by Massachusetts Democratic Party chairman John Walsh on Twitter the same day a Facebook page supporting a Maddow bid went live. “Some are talking about you running vs. Scott Brown in ’12,” Walsh tweeted, and the Boston blog Universal Hub suggested the message could have been meant for Maddow. In three weeks, more than 3,000 people have joined the Facebook page dedicated to getting Maddow to run.

The ‘Reagan Test – aka Purity Test’  is again being proposed for the Republican Party to implement.  The logic behind this  is because Scott Brown won in a Democratic state,  now is the time to ensure only ‘pure’ Republicans are the candidates who will receive GOP money and support.

But it looks like there are cracks in this teapot, as well.  Seems there is a group of Republicans who see Scott Brown as a person who would fail the proposed Reagan Test.

Who is correct in their assessment?  Is Scott Brown the future Reagan of the Republican Party or did he just benefit from the backlash of the majority of Independents who were sending a message to the Democrats and the Establishment?  I guess time will tell, won’t it? 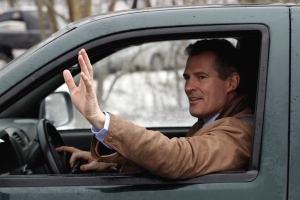 While Republicans are dancing with glee over Scott Brown’s election to the Senate, what does it mean if by his winning this battle, they lose the war?   Will Obama now promising to get tough on Wall Street really bring about the change the Democrats promised?  Will Rush and other Republicans continue to defend those huge salaries and bonuses of the Wall Street Gang?  Is Scott Brown really the independent vote that he promised to the people in Massachussets or is he going to fall into the lockstepping Party of No and just obstruct everything  Obama – including the call for the end of the greed on Wall Street?    Interesting times, aren’t they?

Can’t they just be appointed?

An actual election isn’t necessary, is it?  Can’t the beauty queen and the centerfold simply take over as president and vice president?  They can decide who gets which office between them, or maybe they’ll rotate on a yet to be determined schedule.

What we do know for absolutely sure at this point is that when Brown won his Senate seat in Massachusetts that win had national importance that went far beyond simply winning a single seat in a single race!  🙂  At least that’s what everyone is telling us, so it must be true! 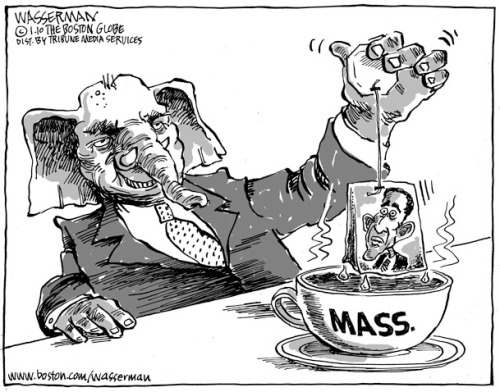 If this tea bagger movement isn’t a tool of the Republican Party (and they have a long way to go to prove they aren’t), can electing Senator Scott Brown be the wake up call needed to remind democrats and President Obama about the change that was promised?  The elections in 2006 and 2008 meant something, and they’ve let the people down.

Between now and the mid-term elections they can learn to govern or they too can go home.  Obama and the democrats tried compromise, they gave away everything and got nothing.  Now is the time to use the majorities the voters gave them and improve America for all Americans.  If they don’t, in an election coming to you soon we’ll be seeing Palin elected POTUS.

To Tea or Not to Tea – that is the Question

Ted Kennedy’s Senate seat is a key race for Democrats to keep their 60 vote majority.  It looks like the Republican who is running has some lingering questions as to exactly who he has aligned himself with.  Perhaps the rubber is meeting the road and Mr. Brown is keenly aware that the Tea Party movement may play in Purity Land of the GOP, it may not play in the general election.