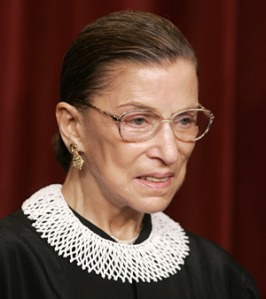 In an interview with the New York Times, 76-year-old Ruth Bader Ginsburg reiterates the need for a stronger female presence on the Supreme Court and says the pro-life movement is fighting a “losing battle.” Ginsburg, the sole woman serving on the Supreme Court, eagerly awaits the confirmation of Sonia Sotomayor and says that throughout her career, she has noticed the stereotypes that affect how her actions are perceived. In the interview, she recalls how an unintended interruption of former Justice Sandra Day O’Connor became a news story about rising tensions between the two, despite the fact that the male justices interrupt one another constantly. Lastly, Ginsburg says that the anti-abortion movement is “fighting a losing battle” by trying to make a woman’s right to choose a decision for each state, adding, “Time is on the side of change.”