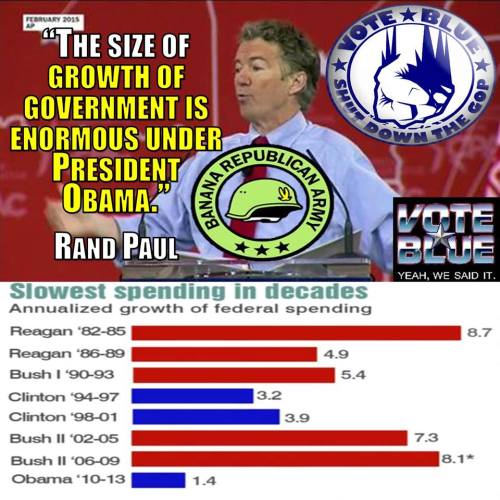 This is typical right-wing fear mongering used to whip up support among the ill-informed, the easily led.  There is no ban.  This is a total fabrication.  In fact, maybe we should use the term that best describes it — it’s a flat-out lie!  This letter of lies was really sent, really printed on this letterhead with the gun pointing straight at President Obama.

You Know What Else is Un-American, Rand Paul?

Here in Kansas we don’t have to worry about oil spills. At least untill Coffeyville KS floods again! ~ sekanblogger

How much does the Tea Party influence who wins?

“I have a message, a message from the Tea Party,” said Rand Paul, a political candidate who made headlines across the United States this week. “We have come to take our government back.”

The Tea Party isn’t really a “party,” in the conventional sense.  They describe themselves as a loose movement of activists who draw their inspiration from the Boston Tea Party — an 18th-century anti-taxation uprising that helped spark the American War of Independence.

Today’s Tea Party wants lower taxes and less government spending, policies it says the Republican Party has promised but not delivered.  So now the Tea Party is supporting candidates who are officially running for office as Republicans, in hope they can change the party from the inside. This week Paul became the most prominent yet to win a Republican nomination, running for the U.S. Senate and sharing credit for his win with the Tea Party.

Paul wasn’t the only anti-establishment candidate to do well this week. Americans nationwide are angry at their elected leaders and several states had a chance to choose both Republican and Democratic nominees for elected office. There were setbacks for well-known candidates in both parties.

“It was an anti-incumbency vote across the nation,” said Bill Richardson, a Democratic Party governor. “If you ran against Washington, you did well.”

With President Obama in the White House and his supporters in control of Congress, the Democrats are currently America’s governing party. The Tea Party is unhappy with the government so the conflict with the Democrats is clear.

But Republicans aren’t entirely sure where they stand. Some have embraced the newcomers, while others have politely pushed them away. The party’s leaders refused to support Paul, at least in part because he doesn’t really support them.

It was a terrible example that Rand Paul used but his point has merit.  I will use this example to explain what he was really trying to point out and the point he was trying to make.

It is the picnic to celebrate Steven and it has been said that anyone wanting to celebrate knowing Steven and his life is invited to come to the picnic.  As we are joining together, there is a knock at the door.  It is George Walker Bush!  Along with him is a Federal attorney and they have a copy of a federal law that states that you can not refuse G.W. Bush to come in and join you.  You can not refuse to allow him to eat any of the food even.  It is not a matter of Bush being hungry and there is no where else for him to eat.  It is that he simply wants to eat at your house and you have no right to deny him or refuse to allow him to come in.

Does the Federal Government, and should it have, the power to tell you who or what you can not refuse to allow into your private property?  Do they have a right to tell you who you have to be tolerant to?

Where does your civil rights ends and those of everyone else start?

It could be argued that your bias toward Bush is not based on real and factual issues, that you hate him enough to deny him access because of your perceptions of what he has done. What kind of person he is and what he may do while on your property.

That is the kind of issue that Paul was trying to point to as being Government intrusion into your property and life.

This is focusing only on one issue but Woolworths was not refusing to feed blacks when they were hungry and there was no where else they could go eat.  If the Federal Government has not funded the lunch counter or the food being served should they have a say on who is served or not served?  Likewise if the Government is not paying for the picnic or the food there do they have the right to tell you that G.W. Bush should be allowed to come?

These issues are a part of the Libertarian believe system and is a reason I am not a Libertarian though have some leaning towards its stances.