Republican National Committee members urged each other to put aside their squabbles and focus on winning big in this fall’s midterm elections at a closed-door meeting this week. After November, and only after November, “if we want to have a convention to argue among ourselves, we can do that,” said former New Hampshire Governor John Sununu, chair of his state party. Sununu later said that infighting is a luxury a party can indulge in only with a super majority. Republicans, eying the president’s slip in the polls, are confident they can win the 40 seats needed to retake the House, and some are optimistic about winning the Senate. But little leaks have become distractions, like a letter saying the RNC is deeper in debt than reported, and an email to foreign ambassadors offering meetings with Chairman Michael Steele. The Nevada Republican Party chair told members, “Forget this fighting—just send us money,” as she tries to help Sharron Angle unseat Senate Majority Leader Harry Reid.  Read more here.

It seems that God has been speaking mostly to Republicans when it comes to the call to serve in public office.  Sharron Angle who hopes to unseat Harry Reid in Nevada joins other Republicans who say God called them to serve.  She says, “I believe that God has been in this from the beginning and because of that, when he has a plan and purpose for your life and you fit into that what he calls you to, he’s always equipped people.”

God, if you believe His messengers, also spoke to Sarah Palin, George Bush and Norm Coleman, calling them to public office.  Why God let Al Franken win Coleman’s seat is another matter.

What other politicians or leaders have you seen claim divine endorsement?  Is God a Republican after all?  In the past when we mixed politics and religion, people got burned at the stake.  Is that where this will lead?

Force the GOP to take a stand 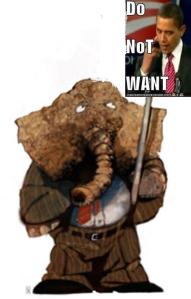 Can a new campaign strategy save Democrats from a disappointing November? The party is settling on a new tack, says The Washington Post: inviting Republicans to vote for a series of modest and popular bills or forcing them to explain to their constituents why they oppose such measures. Senate Majority Leader Harry Reid’s pared-down jobs bill is the first example. On its heels, in the coming weeks, Republicans can expect to vote on lifting the antitrust exemption for insurance companies, small-business assistance, an extension of unemployment benefits, and a proposal to slap new fees on Wall Street banks. “If they support the measures, great,” said one senior White House official. “But if not, the votes will show their hypocrisy and obstruction, which will demonstrate something in itself.”