Mention “Gay Rights” in virtually any group of people and be prepared for a “spirited” debate. In those exchanges, I am regularly “accused” of being gay since “you must be gay to support those perverts.”

Well, I’m not gay, but I know plenty of folks that are and I want them to have the same rights that I do.

The laws regarding homosexual behavior are as varied as could possibly be. Even within the United States, sodomy was illegal until very recently, 2003, and even then it was a 6-3 vote by the Supreme Court. In 1986, the Court upheld the constitutionality of sodomy laws.

Go figure. They must have watched “The Hunger” one too many times.

Despite a lot of efforts, Gay Rights are still few and far between. The “Defense of Marriage Act” allows states to refuse to recognize marriages that are legal in neighboring states.  The military’s “Don’t Ask, Don’t Tell” policy still allows otherwise patriotic and valuable soldiers to be discharged for being gay.

The thread photo captures the irrational fear of homosexuality that marks much of the anti-gay debate. If what James and Aaron do in their bedroom is a threat to national security, then our national security system is sorely lacking.

There is no doubt that the battle for equality for gays and lesbians is an uphill struggle. Changes in attitudes and biases don’t come easily. 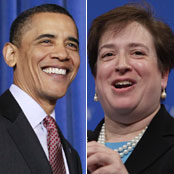 The suggestion that someone is gay is usually taken as a direct accusation of homosexuality. Only being gay is not automatically a disqualification for office anymore. Indeed, many places have laws prohibiting discrimination based on sexual orientation, and there are an increasing number of gay and lesbian officeholders at all levels of elected government. So why do we still think it’s bad to call someone a lesbian?  Linda Hirshman, who admits to knowing nothing about the sexual orientation of Kagan, wraps up her interesting op-ed piece by saying:

Finally, and here’s a real dirty little secret, President Obama appointing an openly gay candidate for the Supreme Court would be political genius. Think about the prospect of watching the married Senator Ensign—who is under investigation for allegedly seeking lobbying work for the husband of his mistress—arguing that the high court nominee is “sinful” or “lacking in personal morality,” as the Focus on the Family suggests. The polls are clear: Regardless of their views on same sex marriage, most Americans do not think gays and lesbians should be discriminated against, and the numbers for gays on all issues are sky high among young voters. The Republicans don’t want to be caught in a Pat Buchanan-style culture war just as the mid-term elections loom, just like enough of them wanted to avoid the anti-Hispanic trap to confirm Justice Sotomayor. It’s a no-lose nomination.

There is nothing wrong with being gay (or lesbian). What hurts is the assumption that it hurts.

Being Gay “Was a Positive Factor”

Pundits are claiming that not only did Annise Parker’s openly gay status not adversely affect her election bid, it may have been “a positive factor” in her election.  Cities like Houston (with a 2.2 million population), Orlando, and Charolotte are becoming international communities and therefore not subject to the petty bigotries of smaller, less diverse places.

Parker’s adversary resorted to smear tactics which emphasized her being gay.  This strategy backfired on the opposition.  Refreshing, no?  Former mayor Bob Lanier, “Houston is long past the years in which an appeal to bigotry is the winning ticket,” – he added, her sexual orientation was “more a positive factor for her.”

Parts of our dear country are moving ahead, it would seem.  How do we get places like Kansas to keep pace?  All ideas appreciated…

Seems to have the debate covered