My “Positive” Sterotypes of Gay People 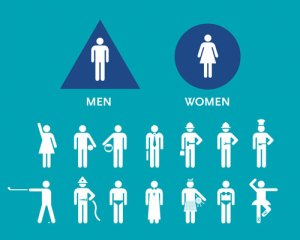 Stereotypes can be quite destructive.  I believe, without firm evidence, that our brains are disposed to making stereotypes vs. not in large part because of the survival value of making stereotypes.  Suppose, for example,  we had to learn anew with each exposure about the dangers of rattlesnakes – not a good thing, adaptation-wise.  And the “costs” of overgernalizing to being afraid of all snakes is less burdensome than failing to make the necessary discrimination about rattlesnakes.

I hold a positive stereotype that most Asians are hard working and conscientious.  I don’t demand a high standard of “proof” for this stereotype – I think this is true more often than not (a > 50% probability).  I have not formally tested this hypothesis, but I think it may be true.  In this book, Malcolm Gladwell goes to great lengths in accounting for this assumption by reviewing the cultural history most Asians share in regard to the cultivation and harvesting of rice – not an easy job.

Sorry for the labored introduction, and I recognize that so-called “positive” stereotypes can be less than useful, too.  Any way, I tend to have some stereotypes about gay people that I  think are “positive perceptions”.  I am pretty sure that I did not know any gay people until I was in college.  All of the gay people I have known were professional people – nurses, physicians, psychologists, social workers, speech pathologists, teachers etc.  I expect that I have a restricted sample in obvious ways.  But given the acknowledged limitations of my sample, it seems to me that these things are, more likely than not, true in terms of gay people I have known:  1) most are good at their jobs – I am convinced of this to the point that if I had to make a hiring decision between to absolutely equal applicants I would tend to hire the gay over the straight person, if that datum was known to me; 2) gay people are dedicated to their work; 3) gay people tend to be intelligent; 4) gay people enjoy their leisure time more than most straight people do; 5) gay people are more tolerant than straight people of differences between themselves and others.

I am unable to offer empirical evidence of these assumptions, but they have been true in regard to my experience.  Appreciate any comments on this subject.

I want to arrest a preacher today!  But only after I give legal cover to as many pedophiles as I can!  These patently absurd arguements are being provided by the religious right as to why GAY people should not be given Hate-Crime protections.  It is tantamount to saying:  “I will lose my religious freedoms, if I am not free to hate!”

1 John 4:8
Whoever does not love does not know God, because God is love.