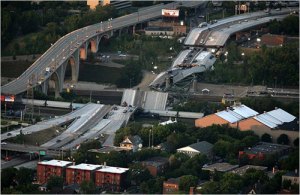 I watched a special last night on the collapse of this countries infrastructure. They talked about the fact there was no collective database on the levees in this country until after Katrina. They talked about the fact states like Texas having only seven people to inspect over 1500 levees; about Mississippi having one inspector for over 1000 levees; about how it would take upwards of $1.6 trillion to bring all the levees up to 100 year flood standards. How California’s waterways are susceptible to flooding by the Pacific ocean if a 6.7 earthquake hits in the wrong area.  And if that happens, Northern California all the way to Los Angeles will have six months fresh water max, with repairs to the fresh water system two years away minimum. It will happen.

We’ve seen what’s happening to our bridges, both in this state and the nation. Look at the energy grid: it’s a mess. One shorted line took out over fifty million homes and businesses. A smart grid is decades off, and it’s needed now. There is no excuse for this not to be happening. There is an atmosphere of neglect in this country, and it boils down to money . . . again. While we’re bailing out banks and financial institutions, our infrastructure is crumbling. Obama has promised to do something about it, but hypocrites like Sanford turn down the money for purely political reasons. There should be NO politics involved in repairing this countries infrastructure: this is our national security at risk. When you’ve got a system in place that requires little thought by an outside enemy of this country to shut down, then the problem becomes major. That system is the one we now have in place. It needs fixing, and it needs it now. Why not build on the nationalistic premise of making this country strong again, and using a volunteer work force to start it going?