Well, it’s Father’s Day weekend, and between barbecues, gag gift opening, and other traditional activities, you may hear someone say “thanks Dad for all you do.”  Father’s Day wasn’t something we celebrated when I was young because it usually fell during wheat harvest, which is a polite term for “collective madness” in Western Kansas.  Dad was too busy getting that crop in the bin so we could survive or thrive, depending on the yield and the price, for another year.  The “thanks” just had to wait.

My father’s been gone now thirteen years, but he remains the biggest influence in my life, and in my business adventures.  He never really thought of himself as a businessman because that was a term reserved for bankers and merchants in town.  “I’m just a dirt farmer,” he would say, as though that didn’t require any special business acumen.  But everything I know about business, finance degree not withstanding, I learned from him, standing on the edge of a wheat field.

Early in the morning, we’d get up to grease the combine, check belts and hoses, air up the tires, and gas up the trucks.  “Take care of your equipment,” he’d say, “because an ounce of prevention is worth a pound of cure”.  Then, before we’d hit the field, we would have a little meeting to assign duties and discuss the game plan for the day.  “Pay attention” he’d shout to someone not listening, adding “if you don’t know where you’re going, any road will take you there”.  I still hear that when I’m writing a business plan.

Later in the day, when the sun was directly overhead, he’d shut off the combine and yell, “let’s go to the house and eat!”  That was unusual, because most farmers were in such a hurry that they made their wives bring sandwiches to the field.  But not us.  We went home and ate a full meal in air-conditioned comfort and watched “As the World Turns” while we rested.  He used to tell me “if you’re working too hard to feed your men and water your horses, you’re working too damn hard.”  I remember that when I’m making stupid mistakes because I’m exhausted and really need some time off.

About mid-afternoon, we’d stop to have a snack and a soda in the shade of the combine.  Of course, as a teenager, I was already talking about how I would spend my harvest wages, which were paid in bushels of wheat to be sold later.  “That crop’s not in the bin yet Sandra Kay” he’d say with a frown. “I wouldn’t spend that money yet”, and that was how I learned not to depend on future income, but live instead on what’s already in the bank.

I have lots of these memories, but the most important lesson I learned was also the most painful.  We were about midway through harvest, with half the crop still in the field, when overnight we had one of those Kansas storms you’ve probably heard about.  This one was different though, and in my bed, I heard the clatter of golf ball sized hail pound the roof of the house.  Even as a kid, I knew what that meant.  The next morning, no one could eat, and Dad and I went out alone to survey the damage.

If you’ve never seen a field completely mowed down by hail, you’re lucky, because to us, it was the saddest sight in the world.  A whole year’s worth of blood, sweat, tears, and expenses were invested in that crop, and overnight, it was destroyed.  That meant no income until next year, but the expenses for planting the next year’s crop would just keep mounting.  I was only about 10, and I started crying because I was afraid we might have to sell the farm and move to town.  (Yes, farm kids grow up early.)  For me, that would have been the end of the world.  And worst of all, it wasn’t even our fault!   I thought surely God must hate us.  Even being my Dad’s “tough little cookie” couldn’t prevent me from crying my heart out.

When Dad heard my sobs, he knelt down beside me for a minute, and rubbed his own eyes and cleared his throat.  “Why are you so upset?” he asked.  When I told him my fears, I saw him try to hide a smile.  “Sandra” he said, “you don’t have to ever worry about that.  We are not quitters.  It may not seem like it now, but the sun will come out tomorrow, the bank will loan us money, and we’ll farm another year.  It’ll be all right, I promise.  You just have to have hope, and a little faith, and not give in or give up.  It will be better next year.  Let’s go home and eat, and I’ll take you fishing today.  We’ll worry about the farm tomorrow.”

So today, on Father’s Day, I’ll just say, “thanks Dad” because I never forgot those words.  Thirty years later, when the financial skies cloud up and the hail pounds down on my business, I think of you, Dad.  I still have hope, I still have a little faith, and I try to believe it will be better tomorrow.

Are any of you aware of how much water you use every time you sit down for dinner? Well, me neither, until I read “When the River Runs Dry” by Fred Pearce.  Here is a partial list of that:

All that water, and little that can be done to recoup it. Hydroponics has come a long way, but feeding millions using that method is just not practical. The grain glut on the world market is a problem that can be addressed, though. For every pound of wheat we export, we are exporting 130 gallons of virtual water. That is what it takes to grow that pound of wheat. And we lead the world in exporting virtual water, make no mistake about that.

All that means we have to do a much better job of conserving the one precious resource  we can’t live without. Take the Ogallala aquifer, that vast underground storage system spread beneath eight states. The aquifer leading water experts say if no water was drawn from any more, it would take two thousand years to replenish. That same aquifer T Boone Pickens wants to own so he can sell its water to Dallas/Fort Worth.  One day, if the powers that be don’t realize the importance of the aquifer for all eight states, it could run dry. If that happens, God help us all. The following is a link to a map showing the declining water level in the aquifer. I might add the map is fourteen years old, so water levels are even less today. 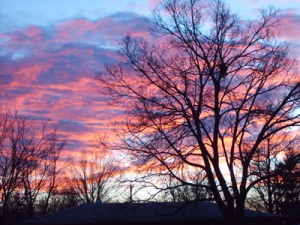 I’ve never been anywhere that has more beautiful sunsets than Kansas. Have you? This was taken in Northeastern Kansas, but I’ve seen the sun set in all parts of Kansas and am convinced sunsets in our state can’t be beaten!

What do you want to talk about today? 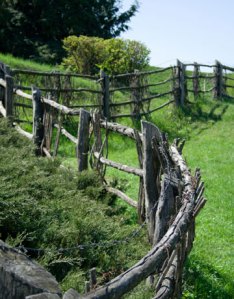 According to google images, this beautiful and serene setting was photographed in western Kansas and is filed under “prairie.” Isn’t it gorgeous!?

So lean on that fence and let’s visit while we drink in the beauty of our state.

Filed under Kansas History, The Environment, The Public Square