Restricting the right to vote has become policy in many states thanks to the ‘remarkable’ leadership of Republican legislatures who can’t prove more than one, and often zero, cases of voter fraud.

So let’s say that I am a reasonable person and that I understand that asking for photo ID to vote, to prove you are the person you say you are, is reasonable. I understand that I have to show ID in many situations. I used to have to show ID to purchase beer or wine or liquor; at least until even the nicest check-out clerk could no longer pretend I might conceivably be under twenty-one.

So now let’s pretend that those folks on the right are reasonable people. I got my voter ID card with the photo on it to appease your unproven, fact-free fears of voter fraud. Why can’t I take my brand spanking new voter ID card to the polls on Sunday? Why can’t I brandish my legal proof that I am registered to vote a week or a month before Election Day to vote early? Why, if I am standing in line for hours to vote with my fancy voter ID card in hand, would the law prohibit the polling place from staying open until I could exercise my right to vote?

I could go on and on with the restrictions placed on what has been until now, the simplest way, the ONLY way, for Americans to have a voice in the so-called democracy of the U.S.

So there is my compromise to the folks on the right. I’ll drive my elderly neighbor Margaret to get her voter ID card if you let me take Margaret to the polls on Sunday after church so she can vote. Deal?

No, I didn’t think so. Because the bottom line is it’s not about voter ID, it’s about making sure not everyone votes. The ultimate gerrymandering. 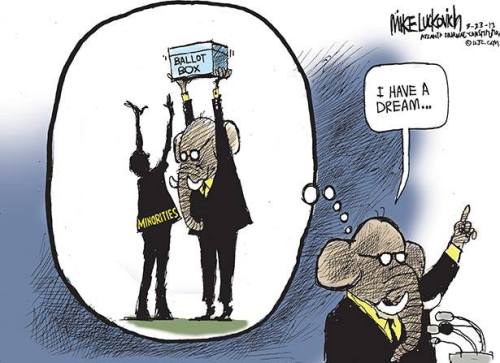