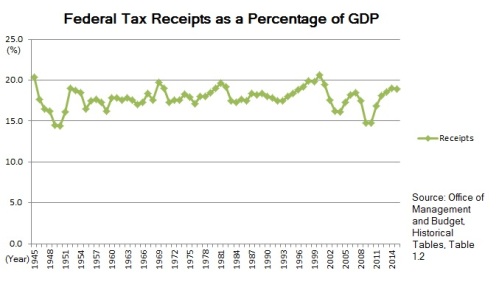 Gross domestic product (GDP) refers to the market value of all final goods and services produced within a country in a given period. It is often considered an indicator of a country’s standard of living (wiki).

From fiscal year 1946 to fiscal year 2007, federal tax receipts as a percentage of gross domestic product averaged 17.9%.  However, 2009 tax collections, at 15% of GDP, were the lowest level of the past 50 years and 4.5 percentage points lower than Hauser’s law suggests.   The proposition was first put forward in 1993 by William Kurt Hauser, a San Francisco investment economist, who wrote, “No matter what the tax rates have been, in postwar America tax revenues have remained at about 19.5% of GDP.”

But current revenue is about 14.5% of GDP (Clinton is the last president who pushed the rate over 19.5%)

What say ye bloggers?  Is Hauser’s law sensible?  If so, how much is the U. S. under taxing each year?