Soon there will be no troublesome middle class 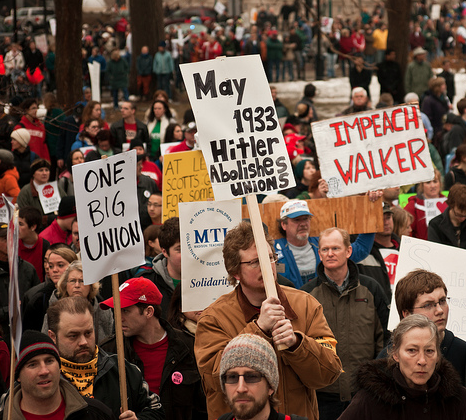 On May 2nd, 1933, the day after Labor day, Nazi groups occupied union halls and labor leaders were arrested. Trade Unions were outlawed by Adolf Hitler, while collective bargaining and the right to strike was abolished. This was the beginning of a consolidation of power by the fascist regime which systematically wiped out all opposition groups, starting with unions, liberals, socialists, and communists using Himmler’s state police.

Fast forward to America today, particularly Wisconsin. Governor Walker and the Republican/Tea Party members of the state legislature are attempting to pass a bill that would not only severely punish public unions (with exception for the police, fire, and state trooper unions that supported his campaign), but it would effectively end 50 years to the right of these workers to collectively bargain.

18 responses to “Soon there will be no troublesome middle class”