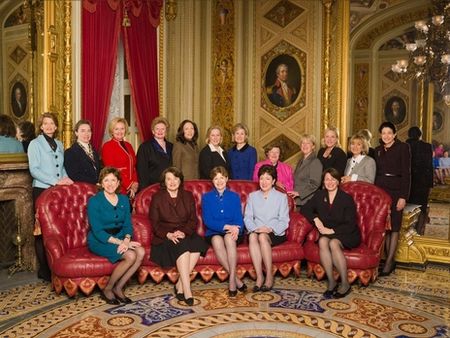 Out of 100 senators, there are just 17 women, of whom five are Republicans and 12 are Democrats.  A regular, bipartisan dinner meeting has helped create a spirit that transcends party lines.  For female senators, there’s more to politics than scoring points.

Among the 17 female senators, it amounts to an informal nonaggression pact. In the male-dominated, tradition-bound Senate chamber, their desire to recapture a long lost sense of civility trumps the constant pressure to score partisan points. It’s a bond forged by their common experience as women in the highest level of American politics, reinforced during a regular dinner meeting led by the longest-serving female senator, Barbara Mikulski (D-Md).  Mikulski set the rules for the dinner group when she launched it years ago: no staff, no memos, no leaks and no men.  Many of the regular diners are at polar opposite ends of the political spectrum, yet it’s unheard of for the female senators to publicly criticize one another.

Would this bipartisanship work for the other 83 Senators?  Would constituents accept bipartisanship and teaming up on key legislation, or do they expect Senators to not compromise and hold the ‘party’ line?