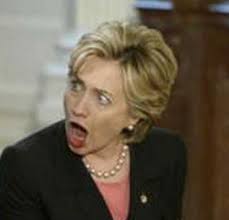 So, you wanted an alternative to Barack Obama? Hillary Clinton? Well, in my not so humble view, she couldn’t have been elected President – not that she wasn’t/isn’t qualified – but she carries considerable baggage from the “Clinton Years.” The General Election campaign against her would have made “Swiftboat” look like an elementary schoolyard spat.

But let’s imagine, the Democrats won and now we have President Clinton, Part II. Now what? Would Hillary have done better? Would she have done better, with all the ” Clinton Baggage” than Barack Obama?

Hillary Clinton is a smart, dedicated, knowledgeable woman who has served admirably as US Senator and as Secretary of State, but she carries huge negative ratings.  Obama entered the Oval Office with relatively high approval numbers, but that did not lessen the opposition that he received from the GOP. The Republican attack machine was in full swing before the last vote was counted.

Let’s look at a few positions where she would be attacked:

“Her husband signed “DADT” and DOMA.” Did she come out and disagree with him? Did she stand up for gay and lesbian Americans at that time?”

The War on Iraq:

“You voted for the War, and you and your husband himself stated that Saddam had WMD!”

“The only reason that the economy was better is the Nineties was there was a Republican majority in Congress!  All the credit goes to the GOP!”

The War on “Terror.”

I don’t agree with the Republican attack points at all. Some of them are outright lies and some are massive distortions, but those would be just some of the daily talking points from the right-wing machine. The machine already has a large file on the Clintons.

Hillary, in general, is loved by the Left and hated by the Right. Public condemnation of her exceeds even that of Obama. Most of it has no basis in fact, but facts seem quite unimportant to the opposition. The Kenneth Starr “investigation” into the Clintons came up with nothing except a blue dress, yet the majority of Republicans and many independents believe that they were guilty of multitudes of crimes. Fair? No, but life and politics are rarely fair.

Do I agree with the scenario that I have painted? Of course not, but in my view, it is a realistic portrayal of a Hillary Clinton presidency.