I miss having only one pair of sneakers. 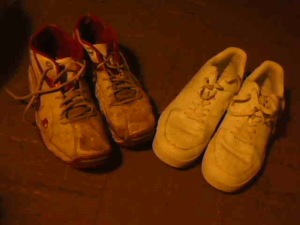 The two lives I have led came together, looking back at the music that long ago meant something to me.  And two of the tasks of today was picking up the room and doing the dishes from the weekend.

It did not help the matter when I hunted up a picture frame for a long ago picture of my wife. I had found the picture in a box while looking for something else and it also takes me back to another time.  One of those School pictures of her while we were dating, reminiscing of the style and period of the mid-seventies and her as the teenage love of my life.  She of course hates the picture saying it is ugly while to me it is an image of the most beautiful of all creation. She will surly hate to see it hanging on the wall now but to me it is the girl now the woman that caused me to Love more then I thought possible.

The picture, the music and the picking up around the house, it started me on a journey of looking at the two different lives I have lived in this lifetime.  At times seeming like they are of two different people.

While cleaning up the family room, I came across two pairs of sneakers; both pairs are mine,  One, the whenever I need to do something that is dirty or may cause harm to my footwear.  The other, the newest and a beautiful and pure white for those occasions when I need to look less like white trash.

Seldom are the newer ones worn, generally when going out in public and my wife wants me to be presentable to the world. But otherwise they are to be hidden away so as to not become dirty and scuffed.  Dirty and scuffed is the job of the old and beaten up pair which if not on my feet end-up just under the coffee table in the family room. Well within reach and always looking like they were used to wade through a swamp.

I miss the days when I only had one pair of sneakers!  When there was simply my current pair of shoes and the world just had to be happy or sad in the same pair.

They were I and who I am not what I wanted the world to think of me.  Sometimes dirty and covered in mud or kind of sort of well worn but comfortable to be with.  They took life as it came not worried about what would come next.  No matter what was ahead, whether the next mountain or river to cross they did not care.  And not one thought as to the road ahead it was simply the route to go at the time.  Care free and comfortable not concerned as to the path ahead.

The old and beaten up sneakers has been running up and down the stairs between the computer and the kitchen sink a lot today. As if wore by two different people, two separate and distinct beings sharing the same body.

One the responsible and mature, thinking of only what has to be done and worrying that it will not be, feeling the need to find a job and pay bills.

The other wants only to spend the hours at the computer, looking up songs and talking about anything and everything other then dirty dishes and cleaning what has not been cleaned. Or finding a job and what job that is. Concerned that I had not decided what I wanted to being grown up.

The soles of those shoes get a little more worn out daily between the two people in one body.  Less comfortable on the feet of the more responsible and mature, who is thinking that any time spend by the other is wasted and childish.  The other feeling like time is too short not to feel the breeze and enjoy the day.  And its counter part is nothing more then an Anchor about the neck of life.

But the old and beaten up are the shoes of most days when there is nothing to drag the one body with two people sharing it away. Right now the more mature personality is thinking writing this is not getting the dishes done or picking up after a weekend with the grandchildren.  It is not finding a job or doing those things that if not for them then who will do them?

The other personality is feeling the desire to be doing this writing and listening to music because it is more freedom then it is a task.  Oh the balance! Between that which needs to be done and that which the heart desires unless it withers and becomes cold and life-less.

Yes the worn-out and comfortable shoes get worn daily in life.  For in the day they must carry the body both in the joy and the duty of living.

4 responses to “I miss having only one pair of sneakers.”