What the GOP Costs America 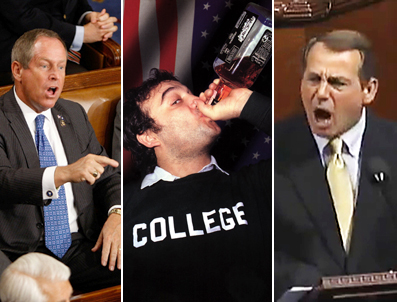 The Party of NO is like an expensive frat party!

There may be “no shame in being the party of no,” according to Sarah Palin, but it sure is damned expensive, Vanity Fair says. In honor of Tax Day, the magazine set out to discover “Just how much money are taxpayers spending on the Republican Party’s commitment to doing exactly nothing.” The answer is evidently $1.32 billion, which includes $47.9 million for congressional salaries; $231.3 million for congressional aides; $163.1 million in health, retirement and other benefits; $533.1 million in paper clips, free postage, and other office expenses; $281.4 million in building maintenance; and $63.5 million in lost federal revenue due to tax-exempt donations to conservative think tanks. As for the latter, as Vanity Fair put it, “Sure, they’ve come up with some interesting ideas. When Republicans enact any of them, you can take this item off the list.”

Tagged as Republicans, Tax Day, The party of NO