The False Equivalency of the Left vs. Right Rage 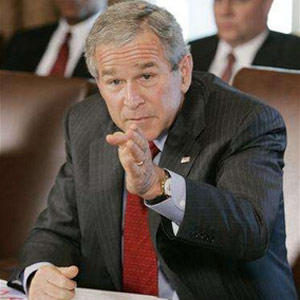 In response to the unprecedented rage that has been leveled at Obama, the Right contends that the Left’s rage against George W. Bush was just as toxic.  This has to be the best example of False Equivalency I have seen for some time.  Were there an equal number of death threats against political figues during the Bush terms?  I am not recalling them.  The whole tenor of the rancor is much worse now than at any time during the Bush junta.

Sure we said Bush looks like a chimp.  The fact is:  he does!  Even though he invaded foreign lands on false premises, did we ever refer to GWB as Hitler:  we did not.  Even though Bush did everything he could to shuffle govenment resources to his corporate friends, did we say he was out to squander our country’s resources:  we didn’t.

We should have done all of the above and more.  Where else did we fail in our criticism of POTUS 43?

37 responses to “The False Equivalency of the Left vs. Right Rage”