80% of the respondents to the above p0ll thought the information obtained by the Census was useful compared to 20% who did not think so.

The fact that the census is constitutionally mandated does not seem to deter Ms. Bachmann.  Read more here.

I think the image below, might be on to something.

Guess What Google is Changing Its Name to…

At 1 a.m. on this date, Google changed its name to “Topeka” in reciprocation for the Mayor’s offer to change Topeka’s name to Google.  I did not know this, but did you know the Indian word “Topeka” means “a good place to dig for patatoes.”  Read more here.

Oh, and I am sure this has NOTHING to do with today’s calender date! 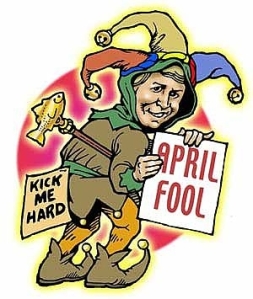