Is The Bible More Violent Than The Quran? 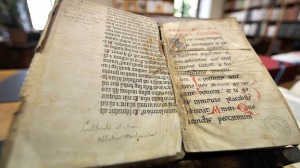 When Osama bin Laden declared war on the West in 1996, he cited the Quran’s command to “strike off” the heads of unbelievers. More recently, U.S. Army Maj. Nidal Hasan lectured his colleagues about jihad, or “holy war,” and the Quran’s exhortation to fight unbelievers and bring them low. Hasan is accused of killing 13 people at Fort Hood, Texas, last year.

Given this violent legacy, religion historian Philip Jenkins decided to compare the brutality quotient of the Quran and the Bible.

“Much to my surprise, the Islamic scriptures in the Quran were actually far less bloody and less violent than those in the Bible,” Jenkins says.

Politico reports that a federal grand jury has subpoenaed the National Republican Senatorial Committee as part of its investigation into Senator John Ensign’s affair with a former staffer. The jury wants documents from the committee pertaining to Ensign’s tenure as the NRSC chairman during the 2007-2008 election cycle. According to local reports, federal agents are also investigating Ensign for allegedly offering to block legislation for a Nevada credit-card company in exchange for a $28,000 donation to the NRSC.

A look to the future

Political scientist Alan Abramowitz has written an interesting piece on demography and politics. Briefly summarized, usually the Republicans win among white voters, although the margin varies from year to year, but Democrats always win the nonwhite vote in a landslide. 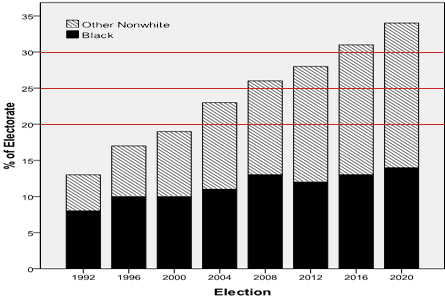 Projections out to 2020 are fairly accurate because anyone who will be of voting age in 2020 was born in 2002 or later and those data are known. In addition, if immigration continues unabated, the percentage of nonwhites is only likely to increase because many of the immigrants are legal and nonwhite and they tend to become citizens 5-10 years after arrival.

The Republicans’ base of (older) white voters is shrinking and the Democrats base of (younger) nonwhite voters is growing. This means that unless the Republicans can figure out how to capture a larger piece of the nonwhite vote, they have a big problem coming up. And poll after poll has shown that the Republicans main policy positions–lower taxes and smaller government–are extremely unpopular with nonwhite voters, who want a larger, more activist government. If the Republicans don’t change their policies, they are unlikely to pickup many new voters in the nonwhite demographic, but if they do change their policies, they may alienate their base. If they win big in 2010, as seems likely now, they may fall into a trap of thinking they are doing the right thing and just continue doing it, when the real reason for a possible big win in 2010 is the historical near-certainty of the voters being disappointed with the Party in charge.

Looking back in history at midterm elections

In the midterm elections, the party occupying the White House nearly always loses a substantial number of seats in both the House and the Senate. Current polling indicates that this year does not appear to be an exception. The chart below shows the House “gains” from 1946 to 2006 for all the midterm elections, where positive means that the party in the White House gained seats and negative means they lost seats. The color is that of the President’s party. 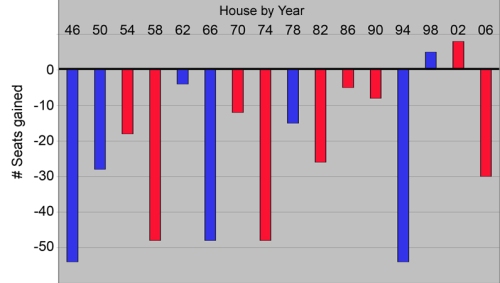 The Senate picture is roughly the same, as can be seen here.

Does this mean the Democrats’ goose is cooked? Not entirely, but the signs are not good for them. In particular, the health-insurance bill is likely to dominate in 2010. If the Democrats fail to pass a bill, they will have shown themselves incapable of governing even with huge majorities in the House and Senate and the voters will surely give the others guys another try. If they do pass a bill and manage to effectively sell it, they might be able to limit losses.