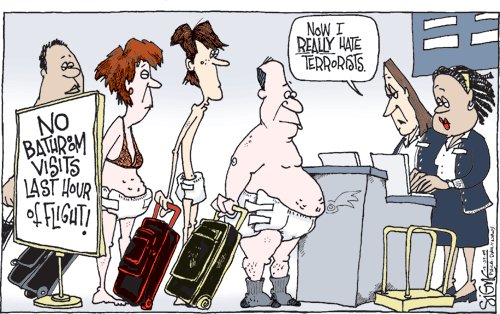 When Richard Reid attempted to blow up an airplane using explosives in his shoe in 2001, President Bush was on vacation and did not comment for six days. The Democrats and the press hardly complained. In contrast, President Obama almost immediately took flack for the failed Christmas Day underwear bombing, particularly from Congressmen Peter King and Pete Hoekstra. Hitting back, the Democrats noted that Hoekstra invoked the attack to raise campaign money. They also blamed Republicans for holding up the nomination of the man Obama has appointed to head the TSA—and Harry Reid has now moved to break the hold on the nomination. “This hypocrisy demonstrates Republicans are playing politics with issues of national security and terrorism,” DNC spokesman Hari Sevugan said. “That they would use this incident as an opportunity to fan partisan flames.”

What we all know is that travelers will pay with ever-increasing dog and pony show hoops to jump through.  Could this also mean good things for our Wichita aircraft industry?  Will commercial airline travel become such a burden we’ll see an increase in the demand for private planes?