Sociologists tell us that the human mind cannot meaningfully grasp numbers higher than a few thousand.  Photographer Chris Jordan has made large mosaics that help translate the raw language of statistics into powerful images of global mass culture that we can respond to emotionally.  The artist says, “I hope to raise some questions about the roles and responsibilities we each play as individuals in a collective that is increasingly enormous, incomprehensible, and overwhelming.”

This picture, the artist titled, “Gyre,” is made from 2.4 million pieces of plastic, equal to the estimated number of pounds of plastic that enter the world’s oceans every hour.  All of the plastic (2.4 million pieces) in this image was collected from the Pacific Ocean.

This mosaic is made from 106,000 small photos of individual aluminum cans.  106,000 is the number of aluminum cans used in the United States every thirty seconds.

Other statistics Chris Jordan has made into images include:

Seeing the cumulative impact of individual actions through this talented artist’s lens awakens us to the enormity of our personal decisions.

To see more images and how Chris Jordan’s work is compiled:   http://www.chrisjordan.com/current_set2.php

Filed under Art, The Environment 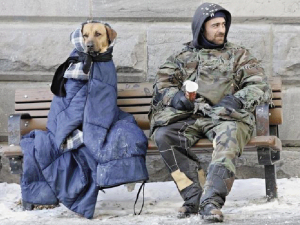 It’s very cold outside.  Remember those who may need our help in staying warm.

What do you want to blog about today?