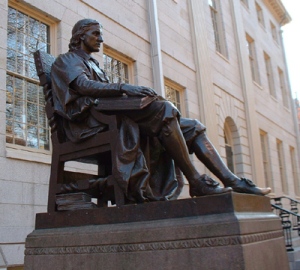 After they get over the thrill of saying “You can’t pahk your cah in Hahvahd Yahd,” about 30 bazillion times, tourists love to walk through the Yahd and have pictures of themselves taken with the statue of John Harvard, whose foot they then rub for good luck 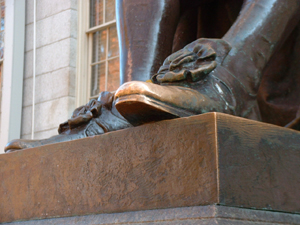 What most of them don’t know, however, is that it’s really “the statue of three lies.” Despite what the plaque on the statue says, (John Harvard/Founder/1638) Harvard didn’t actually found Harvard (the colonial government started the school, then named it after him when he bequeathed his library to it) and the school was started in 1636, not 1638. Even worse, that’s not actually John Harvard! Harvard died portraitless, so Daniel Chester French (as in the Lincoln Memorial) used a friend as a model in 1884. However, French did give the statue skinny legs – because that was one symptom of tuberculosis, which Harvard had. 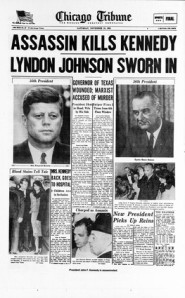 November 22nd is the anniversary of the assassination of John F. Kennedy.  I was in Mrs. Boyd’s 4th grade class when our Principal shared the news that day.  I recall distinctly thinking, “What is going to happen, now?”

The day of the week in 1963 was a Friday.  Jackie devoted herself to orchastrating the funernal – she was 33 years old at the time.

My parents wanted me to stay in and watch the funeral.  I did, but was happy to get outside to play when I was permitted.  I remember we were playing outside climbing trees when a friend came outside and said, “Someone has shot Oswald.”

We replied “no, you dumb ass, Oswald shot, Kennedy!”  We were profane in the 4th grade.  Little did we know, how crazy things were.  I think the killing of Oswald, did much to promote the conspiracy theories advanced afterward.

Deaths of parents can be profound (I have not had one yet), but the death of JFK was the death of the future and hope.  It still saddens me greatly.  I hope our country never goes through anything like it again.

I recently finished the biography An Unfinished Life: John F. Kennedy 1917 -1963 by Robert Dallek.  I would highly recommend it to those who haven’t read it. 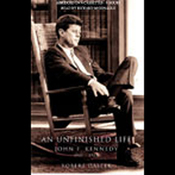 Hey, you bloggers, have memories, thoughts, conspiracy theories, hopes, on this subject?