Watching the Disney channel there was a movie named “Minutemen” where three high school boys create a time machine that allows them to go back 48 hours. What to do with this? They decided to go back and right wrongs committed against the “Geeks.” Having been one who was dogged and belittled almost every year from second grade, this sounded like a dream come true because I was thinking of all the times I was hit or at least belittled. There was the old warning about time travel changing the past and that can have a bad outcome in the future. In this case those geeks they rescued from embarrassment and being belittled turn into shallow and egotistic people.

It got me looking back at my own experiences and what they had to do with the person I am today.

Life is a book with each page written with a new day’s dawning. I only remember a few of my bedevils names, and they were the ones who used force against me, one hit me in the mouth without a warning. For the better part of seventh grade the other one took a dime from me every other day else he would have beat me up. Seventh grade I was a fat, short, a nerdy boy not fit or willing to defend myself.

In the end I went from that weak boy to my Senior year where I used my height, weight and strength to stop those who were preying on the weak and small.

But I wonder if this hadn’t happened, how would I be now? Would I have been inclined to mop up the gym floor with the bully that was using a weak kid to mop up the gym floor my Senior year? Would I be so reserved in using force if it weren’t for all the times I had been the focus of the bully? Our experiences play such a role in the pages written in that book of one’s life. We gain an inner strength or an inner weakness, think our selves worthy or not worthy because of our experiences. We see a wrong or a right based on what happened in our lives, to us as a person. We become what we are today by what happened years ago.

You look back at things experienced and judge which way that influenced your vision of the world and people. At times you don’t even realize the effect or influences and may be reluctant to even think of those days with any fondness. The beautiful boy or girl who shunned you, the bully who for no reason chose you as their target for abuse. Or maybe that one person who came to help you when there seemed no one in the world who would. All are words on the page of that book written of your life.

You became the person you are today through your experiences which had as much an influence as any church or parent. There is always some incident or happening that you might change or do without in the past. But then the question is: would be the you that you are today if you did away with them?

GOT 4TH OF JULY MEMORIES? 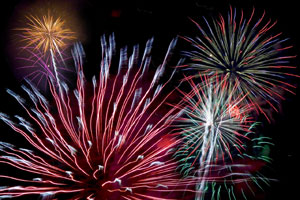