Fastest Soap In the West 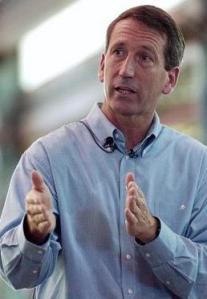 I must say that of all the soap operas I’ve ever seen, whether or not it’s a real life politcal scandal like Gov. Mark Sanford or any daytime soap, they usually all move painfully slow. Slow for the constituents, families, viewers, pundits and anybody else that is entertained/employed by these all too human events.

Think about it. How long did Bill Clinton’s witch hunt carry on? What about your favorite soap? I mean really, on the daytime soaps you can quit watching while someone is in bed dying, you pick the story up six months later and the poor soul is still dying! Not so for this efficient former 2012 hopefull. He’s moving faster than Obama did from Freshman Senator to the Presidency! ~sekanblogger

AP- South Carolina GOP Gov. Mark Sanford admitted Wednesday to an affair, and resigned his position as chair of the Republican Governor’s Association following a strange week in which the governor dropped off the grid and could not be located.

CNN- (8:07pm)  I would like to start by saying I love my husband and I believe I have put forth every effort possible to be the best wife I can be during our almost twenty years of marriage. As well, for the last fifteen years my husband has been fully engaged in public service to the citizens and taxpayers of this state and I have faithfully supported him in those efforts to the best of my ability. I have been and remain proud of his accomplishments and his service to this state.

I personally believe that the greatest legacy I will leave behind in this world is not the job I held on Wall Street, or the campaigns I managed for Mark, or the work I have done as First Lady or even the philanthropic activities in which I have been routinely engaged. Instead, the greatest legacy I will leave in this world is the character of the children I, or we, leave behind. It is for that reason that I deeply regret the recent actions of my husband Mark, and their potential damage to our children.

I believe wholeheartedly in the sanctity, dignity and importance of the institution of marriage. I believe that has been consistently reflected in my actions. When I found out about my husband’s infidelity I worked immediately to first seek reconciliation through forgiveness, and then to work diligently to repair our marriage. We reached a point where I felt it was important to look my sons in the eyes and maintain my dignity, self-respect, and my basic sense of right and wrong. I therefore asked my husband to leave two weeks ago.

This trial separation was agreed to with the goal of ultimately strengthening our marriage. During this short separation it was agreed that Mark would not contact us. I kept this separation quiet out of respect of his public office and reputation, and in hopes of keeping our children from just this type of public exposure. Because of this separation, I did not know where he was in the past week.

I believe enduring love is primarily a commitment and an act of will, and for a marriage to be successful, that commitment must be reciprocal. I believe Mark has earned a chance to resurrect our marriage.

Psalm 127 states that sons are a gift from the Lord and children a reward from Him. I will continue to pour my energy into raising our sons to be honorable young men. I remain willing to forgive Mark completely for his indiscretions and to welcome him back, in time, if he continues to work toward reconciliation with a true spirit of humility and repentance.

This is a very painful time for us and I would humbly request now that members of the media respect the privacy of my boys and me as we struggle together to continue on with our lives and as I seek the wisdom of Solomon, the strength and patience of Job and the grace of God in helping to heal my family.

9 responses to “Fastest Soap In the West”