Grandpa Was A Carpenter by John Prine

This is one of my favorite John Prine tunes, reminds me of my Grandfathers. And the very different world they raised my parents in. ~sekanblogger

Grandpa wore his suit to dinner
Nearly every day
No particular reason
He just dressed that way
Brown necktie and a matching vest
And both his wingtip shoes
He built a closet on our back porch
And put a penny in a burned out fuse.

CHORUS:
Grandpa was a carpenter
He built houses stores and banks
Chain smoked Camel cigarettes
And hammered nails in planks
He was level on the level
And shaved even every door
And voted for Eisenhower
‘Cause Lincoln won the war.

Well, he used to sing me “Blood on the Saddle”
And rock me on his knee
And let me listen to radio
Before we got T.V.
Well, he’d drive to church on Sunday
And take me with him too!
Stained glass in every window
Hearing aids in every pew.

Now my grandma was a teacher
Went to school in Bowling Green
Traded in a milking cow
For a Singer sewing machine
She called her husband “Mister”
And walked real tall in pride
And used to buy me comic books
After grandpa died.

Final chorus
Grandpa was a carpenter
He built houses stores and banks
Chain smoked Camel cigarettes
And hammered nails in planks
He was level on the level
And shaved even every door
And voted for Eisenhower
‘Cause Lincoln won the war.

Well, it’s Father’s Day weekend, and between barbecues, gag gift opening, and other traditional activities, you may hear someone say “thanks Dad for all you do.”  Father’s Day wasn’t something we celebrated when I was young because it usually fell during wheat harvest, which is a polite term for “collective madness” in Western Kansas.  Dad was too busy getting that crop in the bin so we could survive or thrive, depending on the yield and the price, for another year.  The “thanks” just had to wait.

My father’s been gone now thirteen years, but he remains the biggest influence in my life, and in my business adventures.  He never really thought of himself as a businessman because that was a term reserved for bankers and merchants in town.  “I’m just a dirt farmer,” he would say, as though that didn’t require any special business acumen.  But everything I know about business, finance degree not withstanding, I learned from him, standing on the edge of a wheat field.

Early in the morning, we’d get up to grease the combine, check belts and hoses, air up the tires, and gas up the trucks.  “Take care of your equipment,” he’d say, “because an ounce of prevention is worth a pound of cure”.  Then, before we’d hit the field, we would have a little meeting to assign duties and discuss the game plan for the day.  “Pay attention” he’d shout to someone not listening, adding “if you don’t know where you’re going, any road will take you there”.  I still hear that when I’m writing a business plan.

Later in the day, when the sun was directly overhead, he’d shut off the combine and yell, “let’s go to the house and eat!”  That was unusual, because most farmers were in such a hurry that they made their wives bring sandwiches to the field.  But not us.  We went home and ate a full meal in air-conditioned comfort and watched “As the World Turns” while we rested.  He used to tell me “if you’re working too hard to feed your men and water your horses, you’re working too damn hard.”  I remember that when I’m making stupid mistakes because I’m exhausted and really need some time off.

About mid-afternoon, we’d stop to have a snack and a soda in the shade of the combine.  Of course, as a teenager, I was already talking about how I would spend my harvest wages, which were paid in bushels of wheat to be sold later.  “That crop’s not in the bin yet Sandra Kay” he’d say with a frown. “I wouldn’t spend that money yet”, and that was how I learned not to depend on future income, but live instead on what’s already in the bank.

I have lots of these memories, but the most important lesson I learned was also the most painful.  We were about midway through harvest, with half the crop still in the field, when overnight we had one of those Kansas storms you’ve probably heard about.  This one was different though, and in my bed, I heard the clatter of golf ball sized hail pound the roof of the house.  Even as a kid, I knew what that meant.  The next morning, no one could eat, and Dad and I went out alone to survey the damage.

If you’ve never seen a field completely mowed down by hail, you’re lucky, because to us, it was the saddest sight in the world.  A whole year’s worth of blood, sweat, tears, and expenses were invested in that crop, and overnight, it was destroyed.  That meant no income until next year, but the expenses for planting the next year’s crop would just keep mounting.  I was only about 10, and I started crying because I was afraid we might have to sell the farm and move to town.  (Yes, farm kids grow up early.)  For me, that would have been the end of the world.  And worst of all, it wasn’t even our fault!   I thought surely God must hate us.  Even being my Dad’s “tough little cookie” couldn’t prevent me from crying my heart out.

When Dad heard my sobs, he knelt down beside me for a minute, and rubbed his own eyes and cleared his throat.  “Why are you so upset?” he asked.  When I told him my fears, I saw him try to hide a smile.  “Sandra” he said, “you don’t have to ever worry about that.  We are not quitters.  It may not seem like it now, but the sun will come out tomorrow, the bank will loan us money, and we’ll farm another year.  It’ll be all right, I promise.  You just have to have hope, and a little faith, and not give in or give up.  It will be better next year.  Let’s go home and eat, and I’ll take you fishing today.  We’ll worry about the farm tomorrow.”

So today, on Father’s Day, I’ll just say, “thanks Dad” because I never forgot those words.  Thirty years later, when the financial skies cloud up and the hail pounds down on my business, I think of you, Dad.  I still have hope, I still have a little faith, and I try to believe it will be better tomorrow. 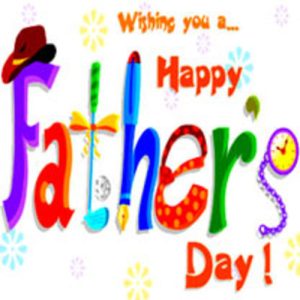 Sure hope every Dad gets a hug and a thank you today.

If you’re a mom, a grandparent, anyone filling the role of Dad — an extra big thank you. Those are big shoes to fill!

Our blog marks a milestone today. We are THREE MONTHS OLD. Yes, it was three months ago today the email saying Iggy was ready for company went out. We’re growing and going strong.