Small town living and the opportunities it gives my sense of humor.

Small towns no matter where they are seem to live by a simple motto: If the truth is not bad enough then make up a good lie! I have now lived in three what would be called “small towns,” two in Kansas and one in Oklahoma. All seem to live by the motto one way or another.  The first, Sterling, a small town whose biggest claim to fame is the Christian College located there. Sterling, where West Sterling road is on the East Side of town, so of course East Sterling road is on the West Side.

It was rumored that there is a nudists camp somewhere to the South of town. Where exactly it is seems unknown, as you will get at least five different directions from five different people. As to how this rumor got started is a real question. But I think it started when a female co-ed at the Christian College finally admitted her top-less sunbathing somewhere on the Arkansas River South of the town! But then that would not be worth a continued telling a nudist camp would be.

Sterling was my first exposure to the know all people of a small town. I knew very few people in town but one day learned that many knew of me. We had three cats, a white one, a black one and a black and white one. After not seeing our black and white one for a few days, I went door to door asking if they had seen it.  Two blocks to the South I knocked on an elderly lady’s door and told her I was looking for one of my cats.  Before I could even say where I lived, she started in, “Oh which one?  The black one, the white one or the black and white one?”  Before I could answer she went on, “Oh you are Greg and Debbie’s brother-in-law and your wife is Debbie’s sister and you work at the college and your wife works at the laundry in Lyons.  You moved here from Wichita and use to work at the Ark manufacturing and….”

I stood there dumbfounded! I knew very little of my neighbors and only knew such details about close friends. The CIA could take lessons from small town people about gathering information!

The next was Rush Springs, OK.   Here, armed with my foreknowledge of small town living, I thought I was prepared.  But it was there that I saw almost on a daily basis the living example of the Motto.  All it took for you to be having a full blow affair was to be seen talking to anyone of the opposite sex.  A rumor flowed around town like the waters of a dam breaking, the chief of Police was screwing around on his wife with Miss Alturas (funny how no matter if a woman was married or not they were always “Miss”).

And what evidence was there that this affair was going on, I asked the chief one day?   Miss Alturas is a seventy-five year old woman who is hard of hearing and half blind but still drove herself everywhere.  She ran the four way stop sign in the center of town and almost caused a collision. He fell in behind her and with red lights and siren going, followed her nearly five miles outside of town before she stopped.  She had not noticed him behind her till then. Her wrote her a ticket and told her that she would have to pass a test before she could continue to drive. But somewhere because they were seen talking there must have been sex involved!

One night a young couple was horsing around with the girl riding on the back of her boyfriend. She fell off and landed on some broken glass and cut her forearm. They came to the Police department and I dressed the wound and told the boyfriend she needed to go to the E.R. as she might need stitches. After they left I turned to a fellow officer and said that within an hour the story would involve a deadly weapon and the girl dying! Sure enough, an hour later I encountered an outraged citizen.  She was upset I had not arrested Mike after he had taken a chain saw and cut off Stacie’s arm in the parking lot of the gas station!

It was a no win situation for me.  Because I seldom was seen talking to women some of the town’s people thought I was Gay. While those who had seen me talking to women in the role of a Police officer had me getting all kinds of sexual acts committed on me in public. When ever an outraged citizen brought up the subject my response was always the same, “Gee I wish someone had waked me up!  I must have been asleep and it sounds like I was having a good time.”

Sometimes it would be the woman themselves that was spreading the rumors. It got back to me that this one woman was going around town saying she had sex with every cop in town, including me. One night I saw her in a parking lot talking with her friends. I stopped and told her I had heard that we had sex. I then informed her no offense but if the end came and she, a man and myself was the only humans left, I would turn Gay! The rumor suddenly stopped about her and I having sex.

END_OF_DOCUMENT_TOKEN_TO_BE_REPLACED 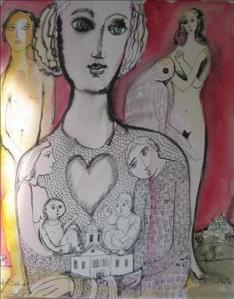 To those Dads, Grandparents and others who also make great mothers, thank you — here’s to you too!  Biology is not what makes someone a mother.

Being a mother is one of the highest salaried jobs… since the payment is pure love.

Tell us about your Mother.

This is your thread, take it and run with it!