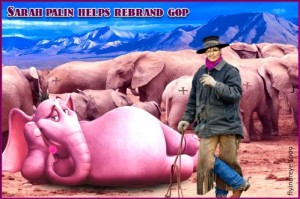 Behaving in an even more ridiculous way than we’ve grown to expect, Rush Limbaugh has declared that Former Governors Jeb Bush (FL) and Mitt Romney (MA) are embarrassed by Sarah Palin.  He went on to say Bush and Romney “hate” and “despise” the Alaska Governor and former running-mate of John McCain.

Limbaugh defended Palin and heralded her as the “most prominent and articulate voice” for conservatism.

Yep, he said she is articulate.

So have the drugs finally destroyed his last brain cell?  Is he being paid by the Democratic National Committee as an ambassador for the Democratic Party?  Is it possible he can’t see ridiculing his own party and leaders make the party and himself look even worse?  Does he simply say whatever may create the greatest controversy and gain the most listeners?  If that is so, then we must consider the mentality of those people who hold him in awe.

David Addington:  “Torture?  I don’t remember, but  what does that word mean???”

Phillip Zelikow, serving as counsel to Condi Rice, suggests that his memos questioning the legal arguments for enhanced interrogations disappeared and he is blaming Cheney for the cover up.

Something tells me we aren’t in Kansas anymore!  Anyone have an idea of where the above Public Square might be located?  Let’s make it our place for today while we talk about whatever we choose.