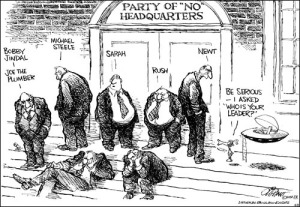 The Republican Party has proven to have no ideas, no alternate plans, can’t even decide who leads them and what they stand for, and now to add to their problems, they have to scramble to keep up with everything they need to be against!

President Obama is pushing forward, and his agenda isn’t limited, but includes addressing all our nation’s concerns and challenges.

“The budget! The environment! Immigration! Why is Obama attempting so many big projects at once? It’s not a legislative strategy, Eric Alterman argues. It’s a way to drive his enemies insane.”

“Obama’s opponents will continue to look angry, unreasonable, unfriendly, and generally distasteful in more ways than one can comfortably count.”

Interesting observations! Read it all here:

I was born in Santa Monica, Ca, and lived on Walgrove ave until I was eleven. Walgrove started at Venice blvd, across from Venice high School, and ended at Airport street, just this side of Santa Monica. It crossed Rose ave, which led to the Penmar public golf course. Rose ave is also where my first love lived, if you can call a forth graders crush a first love. Naturally that lasted about a month, after which baseball season started. So much for girls back then.

Walgrove was a fairly busy street. Not much in the way of stores or business, but a convenient path for getting around. It had its fair share of characters, one of which was named Larry. Larry had what I think today would be called Parkinsons, or maybe severe autism. He had problems controlling his motor nerves, but managed to do many odd jobs around the neighborhood. He rode a three-wheeler of his own making, with a basket mounted on the front for carrying whatever he needed to do his odd jobs. His speech was slurred, and was the butt of many jokes by the kids. I remember getting really angry whenever one of the kids teased him, and got into a few fights because of it.

I spent quite a bit of time with Larry, listening to his life’s lessons, and enjoyed every minute of it. He passed away before we moved, and the neighborhood was never quite the same without him.

We had our fair share of bullies, including one family where all the kids, five of them, three boys and two girls, excelled at pounding on anyone smaller then they were. Their comeuppance came in the form of one Halloween and all of them together trying to steal the candy from some kids. The kids, though, turned out to be high school seniors, and football team members at that. Being in costume, neither side knew what the others gender was, so there was a major butt kicking that left all the bullies bloodied. They kept pretty much to themselves after that, and we moved away a year later.

A church was being built next door to us, and us being Catholic, and the church being Protestant, the three of us kids, me and my two sisters, were forbidden to talk to them. I thought the construction workers were cool, so I used to go over and help them whenever I could sneak there without mom knowing. Mom never said anything, so I think it was my dad who came up with that one. I was probably of little help, but I felt good doing it.

When I was six or seven, I made the ubiquitous statement I wanted to be a fireman. Naturally, my folks bought me one of those little peddle firetrucks for Christmas. Apparently, I took it out on Walgrove, and started riding it down the middle of the street, because that’s what firetrucks do, don’t you know. Anyway, some real firetrucks were coming back from a fire, saw me riding down the street, and brought me home. I do remember getting scolded by the firemen, but my guess is they were cracking up over it. I know I would be.

We moved, like I said, when I was eleven. The street was located in Venice, but was annexed to Los Angeles, and became LA 66, with higher taxes. So we moved to Garfield ave, right in back of the Catholic church and grade school, St Marks, and a new McDonald’s just in one block away. And that’s another story altogether.

Comments Off on Ramblings of a (Walgrove ave) SoCal mind

Whether this is a day of worship and meditation or egg hunts, here’s hoping it’s a peaceful day that gives each of us what we’re looking for.